I saw this movie popping up on quite a few “Best of 2011” lists, and pretty much the same amount of “Worst of 2011” lists. What gives, guys?! How can so many people like and so many people hate it?! Really all I knew was that it had some slasher elements to it and that it revolved around some kids being stuck in detention. I’m assuming that’s how it got its name, right? Oh yeah, I also knew that Josh Hutcherson was in it, and that he was also in The Hunger Games. The only male character’s name from The Hunger Games is “Peeta”, is that who he played? I kept shouting that name at the TV trying to get Rampaige excited for this movie, but it didn’t work. She laughed out loud at one joke and got really excited when she heard a Metric song being played, but other than that, she wouldn’t shut up about how much she hated it. But did the Wolfman hate it? KEEP READING AND FIND OUT! 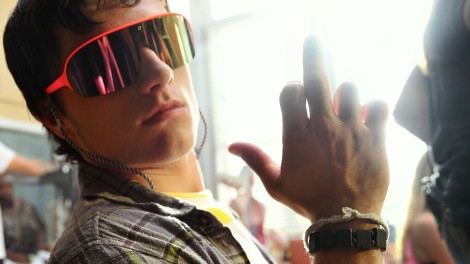 Straight up, that Peeta is one cool dude.

THIS MOVIE WAS SO FUCKING CONFUSING! I don’t even know if I can adequately order the events in my head or in writing, but I’ll try to piece some things together. Riley (Shanley Caswell) is the feminist/vegetarian girl in school who, despite denying her own feelings, has a crush on Clapton Davis (Josh Hutcherson), who is the loser/cool dude in school. He kind of has feelings for Riley, but is also way too busy making out with the “hottie” in school and he’s not really sure he wants to give that up. There’s also a murderer out there who is dressing up as the killer “Cinderhella”, a popular horror movie franchise. Some other things going on? There’s time travel, alien abductions, Dane Cook, and LOTS of references to the 90’s. I’m just going to leave it right there, because describing the plot of this movie is absolutely NO indicator of whether or not you’ll enjoy it, because the plot was really the least of the filmmakers’ worries.

Poor girl. She makes fun of Hoobastank and then five minutes later gets killed.

There is so much, SO MUCH, shit going on in this movie, I still don’t really even know what happened. I’m not even sure how I feel about calling it a “horror” movie, because horror definitely seemed to serve only as the premise, and came across more as a comedy. Remember how in the late 90’s, there was a trend in films where they were trying to capture the spirit of movies from the 80’s? That’s what I felt Detention was, except instead of focusing on the 80’s, it focused on the 90’s. There were so many references to things that were popular in the 90’s, but as soon as I heard one, it was immediately replaced the next time there was a different 90’s reference, so I apologize for not being able to list multiple examples. I do remember that Riley’s character went to a 90’s themed costume party and dressed up like Claire Danes in My So-Called Life, and I thought that was funny. All I can really focus on is how much shit they managed to cram into a 90 minute movie, it’s really quite impressive. Impressive, that is, until I sit here a few days later and realize that there was so much stuff that I can’t really recall any of it. The ratio of jokes/90’s references per scene was really high, so if you like your horror-themed comedy, you’ll absolutely love this movie, but I can totally understand why it drove so many people away. Even though some of those references felt pretty forced, there were quite a few that reminded me of how crazy things were in the 90’s and writer/director Joseph Kahn really hit the nail on the head. One scene in particular shows the fashion/pop culture trends of previous years at three year intervals, so going from 2008 and everyone wearing Ed Hardy hats, then to 2005 and everyone listening to The Killers, then to 2003 and listening to 50 Cent and wearing Ashton Kutcher trucker hats, it totally brought you back to when those things were popular. It’s a combination of Scream, Can’t Hardly Wait, and Donnie Darko, with much brighter colors and jokes about how the youth of today are completely fucked in the head. Even though I’m not really sure I could stomach this movie for a second time, due to all the bright colors and fast cuts, I’d kind of like to read the script to try to see all the things I might have missed. I’m also going to make sure to keep my eyes out for what Joseph Kahn does next, as he definitely has a sense of humor and visual style that made a fun movie. 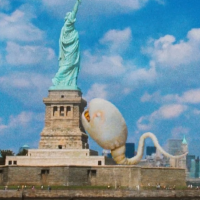