Why am I watching a movie that no one really liked five years after it came out? GOOD FUCKING QUESTION! I wish I had a better answer other than “Because I could watch it online for free”, but the answer is “Because I could watch it online for free”. There are times in your life where you need to kill 90 minutes of it, and when those times arise, sometimes it seems like watching Vacancy is the best way to waste those minutes. Before we go ANY further, however, in case you guys are having a hard time remembering this forgettable film, let me tell you that it does NOT star John Cusack, and you are NOT thinking of the movie Identity, which also took place at a hotel. That movie, boy oh boy, now THAT movie was a piece of shit. Not that Vacancy was all that much better, but at least we didn’t realize halfway through this movie that none of the characters were real people and they were just figments of someone’s imagination. 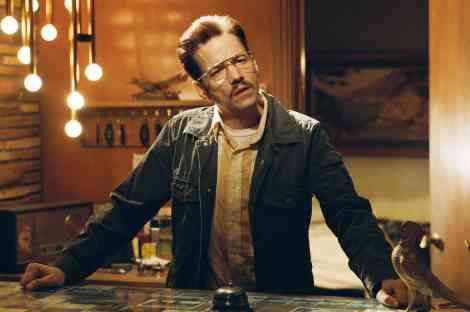 “Hey lady, you look familiar. Have you ever seen that movie Click?”

Big dumb David (Luke Wilson) is driving little dumb Amy (Kate Beckinsale) away from her parents house, when they get lost and pull into a gas station. Nervous that the car is busted, a mechanic (Ethan Embry) lets them know that their car should be okay, but that there’s a motel not that far away. Unfortunately, their car doesn’t make it, so the couple have to walk to this really sleazy looking hotel. While looking for something to watch David pops in a video tape of what looks like a horror movie, and that’s when someone starts banging on the walls and door to their room. Not being able to figure out who is there, that’s when David realizes that all of the videotapes he’s watching are actual murders, and they’re all taking place in the room where they’re staying! Oh no! What follows is a pretty generic game of cat and mouse, where the characters almost escape, but then are found, and a policeman shows up, but he is killed, but eventually the masked killer is run over by Amy in the cop car. When his mask is removed, we see that it was the mechanic trying to murder them! It’s almost like he was in on it! Amy and David live to tell another tale, despite the viewer not really giving a shit about what happens to them. 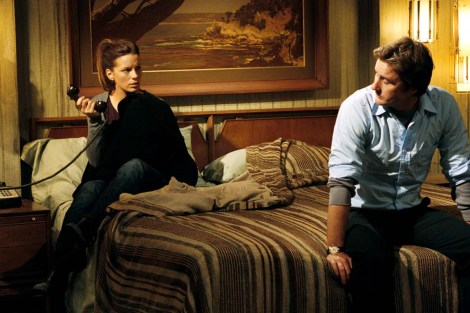 “Hey Luke, it’s your brother Owen calling from the set of I Spy 2, want me to tell him you’re too busy because YOU can make movies too?”

Even when this movie was originally released, it didn’t interest me in the slightest, and every single person who has told me they have seen it has said it was terrible. But ya know what? I’ve seen worse. Granted, I’ve seen a LOT of shitty garbage, so saying, “I’ve seen worse,” is something I can say about a lot of things. When I see a movie this bad, I try to find any sort of silver lining, because this is one of those movies that wasn’t even so atrocious that it was unwatchable, it was just so incredibly bland. The only thing that I found to be the slightest bit different about this film, despite me point out the same thing when The Strangers came out a year later, was the way we were introduced to the main characters. I refer to David and Amy as an unhappy couple, because they have already decided to get a divorce and were in the process of going through that paperwork when the movie starts. I think that little plot detail just added a sense of discomfort to the viewer, as we’re used to seeing happy couples, so to see the tension between them added just a little bit more tension to a relatively tension-less plot. Also, even though I’m sure it was obvious that the mechanic was in on it from the beginning, Embry’s character seemed decent enough in the beginning and wasn’t shown too often throughout the movie did it did come across as a little surprising, but that’s really just compared to thrillers with obvious reveals. I think there might have also been a decent kill or two that might have made me think, “Oh, that wasn’t that bad,” or something, I don’t know, I think I blacked out a few times while watching it. Between the awkward tension of the couple, not too awful of deaths, the twist of the people being murdered for videotapes being sold to creeps, it wasn’t completely awful, but still not something I would recommend to anyone ever. EVEN IF IT WAS FREE!