Not including remakes or sequels, there are three big problems that cause horror movie fans to preemptively judge a film by. One of those things would be horror movies that get a wide theatrical release because these are typically movies that are “safe” and are really just trying to make a profit. They just throw together some “hot” stars and hope that their target audience (teenagers) can be interested enough to spend some money on. Another problem horror fans have is when a movie is PG-13, because most people assume that there won’t even be scary enough imagery to warrant a stronger rating. I can see where people are coming from with that argument, but rather than pointing out exceptions to that rule, I’ll just go along with it. Yet another bit of information that can make someone hesitant about the quality of a horror film is to find out that it had been made years prior and the studios were just waiting until the perfect moment to dump it on people as to have no competition. In the case of House at the End of the Street, I think even fair-weather horror fans knew what they were in for with this PG-13 rated movie made a few years ago that was taking advantage of Jennifer Lawrence‘s popularity to get a wide release. I’m probably alone on this, but despite all of those things it had stacked against it, I found a few things enjoyable about this otherwise forgettable film.

And we’re supposed to believe that HE is the creepy one!?

A little girl attacks her parents with a hammer, killing them both. Four years later, Elissa (Jennifer Lawrence) moves into a new house which is the second house from the end of the street. The one at the very end? Why, that’s the one where this double murder was committed! Despite the dead parents and little girl never being heard from again, the son of the family, Ryan (Max Thieriot), still lives there by himself. Despite warnings from all the other neighbors, Elissa befriends Ryan, but when we see Ryan caring for a woman tied up in his basement who he calls by his “dead” sister’s name, we know something wacky is going on. A few times this girl tries to escape, only to be apprehended by Ryan and tied back up. With their romance getting sexy, Ryan admits to Elissa that before his sister murdered their parents, he was swinging with her on a swing set and he accidentally pulled her off the swing, causing brain damage. He feels like he’s the one to blame for everything, which is why the audience almost sympathizes with him not telling anyone about his sister being tied up. After Ryan is attacked by some neighborhood kids, Elissa goes to the house to find him, which is when she finds the girl locked in the basement, along with an empty container of colored contact lenses. What we learn is that the girl tied up isn’t really Ryan’s sister, but rather just a girl unfortunate enough to get too close to Ryan, and she’s just there to fill the void of his sister who he reveals actually died during the swing set incident. Elissa is able to free herself, with help from her mom, and Ryan is left alive, but badly wounded after the whole ordeal. While Elissa and her mom are moving out of the house, we see Ryan in a mental institution, and then see some of his flashbacks. As it turns out, with his parents being drug addicts, when his sister died, his parents made him grow his hair long and started to refer to him by his sister’s name, and the night that he killed his parents was the night he couldn’t take it anymore. You drug addicts and your obsession with putting dresses on boys, will you never learn?!

I’d like to give HER a “winter’s bone”, if ya know what I mean! I think that meant I’d give her a boner. Whoops. Well, not like I can delete that joke.

Let me be clear: I don’t think this movie was good and I didn’t think that anything that happened in it was scary. I can see exactly why this movie was shelved for a few years, because nobody would have cared to see it if it wasn’t for Jennifer Lawrence’s popularity. That being said, I found that the story played out in a more creative way than most other widely released horror movies, regardless of what the rating is. In addition to the lengths that Ryan was willing to go to in order to keep his secrets safe, the town sheriff (Gil Bellows) was doing drugs with Ryan’s parents at the time of his sister’s accident, so he has been lying to make sure that both he and Ryan are safe. One thing that didn’t click with me until just now was that the movie kept saying Ryan was living with his aunt at the time of the murders and that he only came back once his parents were murdered. I couldn’t really figure out the continuity of the story and how Ryan could both be at his aunt’s and at home to murder his parents, but then I remembered it was the sheriff who gave that information to protect himself. NOW IT’S ALL MAKING SENSE! A lot of widely released horror movies of recent memory, especially ones rated PG-13, have a predictable “twist” at the beginning of the third act to try to make the audience question who or what the threat really is. The first thirty minutes of the movie lead you to believe the potential sister murderer walking in the woods is going to be the threat, but then it’s revealed that she’s not the one to be concerned with. Even though you know that Ryan was the one keeping someone tied up, you still aren’t sure who he poses a threat to. Through the rest of the film, Ryan is the only threat, so to reveal that early who the threat is but only reveal towards the end the reason why he’s a threat gets some credit from me for at least being different from a lot of other films. Add to that the final reveal of the movie, and considering how big a fan I am of Sleepaway Camp, I thought it was a pretty bold direction to go in for a PG-13 movie. Again, this movie isn’t good, and it’s not scary, but it unfolded as a melodrama that had enough twists and turns to keep me interested. 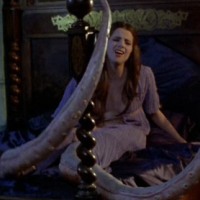