Talk about the dog days of summer! It’s getting hot out there, guys! Better wear your sunblock and your floppy hats! I generally prefer to watch movies that reflect the time of year or season that I’m currently in to really be able to feel the mood a lot better, but sometimes you have to say fuck it and watch stuff that’s completely the opposite. I was a little nervous about watching Blood Runs Cold as I’d never heard anything about it and sometimes those random movies I get screener copies of can be disappointing. I decided to live a little and roll those dice because, hey, what’s the worst that could happen? I do have to admit that I didn’t realize this movie stars Swedish actors speaking in English with varying degrees of accents so throughout most of the movie I just thought everyone had speech impediments. Clearly it’s my brain that has the impediment.

Screaming for her life or not, I’d gladly Swedish HER meatballs, if you know what I mean! That’s a sexy thing to say, right?

Someone wanders through the cold, covered in snow, before quickly being murdered by another figure. Winona (Hanna Oldenburg) is driving through the snow to stay in a cabin in her hometown to take a break from her musical career. Wanting to get out of the house, she bumps into her old boyfriend Richard (Patrick Saxe), who she invites back to her cabin along with two of his friends. There’s some drinking, there’s some tomfoolery, there’s some sexy times, and there’s some violent murders. A snow-covered figure, wearing what appears to be old miner’s equipment, is stalking the group of friends and is trying to dispose of them. They meet their grisly demise, one by one, and any attempts to wound or maim this miner just result in a puff of steam escaping from his body. It’s up to Winona to try to figure out what’s going on, what’s happening to her friends, and how she can escape her vacation alive. 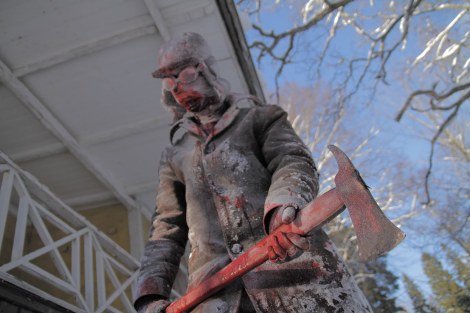 Was really hoping they’d reveal the murderer to be a Swedish Yosemite Sam.

You’re trying to tell me that a group of friends going to a remote cabin could end poorly?! YA DON’T SAY! The movie is pretty straight forward in setting up this group of friends to be sacrificed to whatever mysterious thing is that is set on destruction. We don’t really get to spend enough time with any of the characters to connect to them, so there’s not too much sympathy when any of them are killed. Another issue with Blood Runs Cold is that there was such a small cast of characters, so every death was a removal of 25% of the cast. One of those characters was even killed off-screen! WHY WOULD YOU DO THAT?! It was especially disappointing because the few segments of violence were done with practical effects and were done pretty well. I also enjoyed the fact that the antagonist seemed to be part ghost, part zombie, part cannibal, with really no explanation whatsoever of who he was or how any of this was happening. A lot of movies think they can be original by inventing some new mythology, but Blood Runs Cold went the opposite direction and just let the audience fill in the blanks. All we needed to know was that there was something killing these kids and couldn’t be stopped by conventional means. The ending was really abrupt, so much so that I skipped back to watch the ending again to see if I missed something, but nope, just kind of ends out of nowhere. I noticed one of the reviews on the back mentioned it being short, and wondered why that would be considered a good thing, but the movie clearly hit all the points it wanted to and didn’t feel the need to drag it out arbitrarily. The film had a couple of decent effects and ended before you could get bored with it, which is more than I can say for a lot of other garbage that I watch, but ultimately there weren’t enough things I enjoyed to think to highly of it.