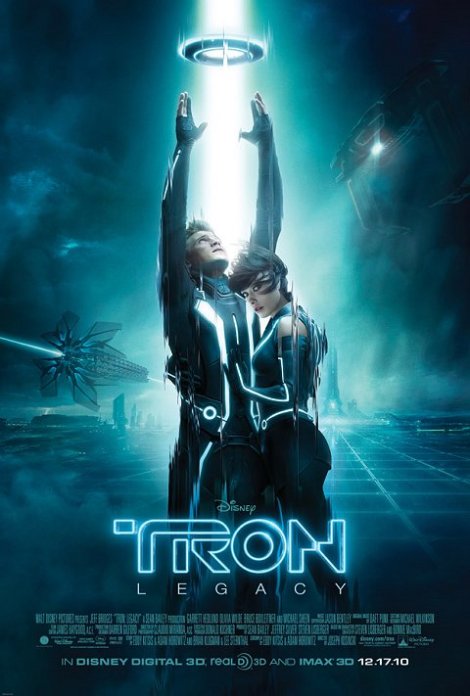 I’m not going to act like I wanted to see this movie all that much, because, well, I didn’t. In case you read my review for the original TRON (review here), you might not remember that I admitted to not really liking the first film. The only reason I even reviewed it was in case TRON: Legacy looked good, I would want some background information. The first time I saw a trailer for this film, I shit my pants for a few reasons. First reason? IT WAS SO GODDAMNED LOUD. Seriously, the volume was at a bowel shattering level, so it was really intense. Another reason was to figure out how they could make a sequel to a film that obviously lacked quite a bit in the plot department, but was just supposedly a “groundbreaking” visual effects film. Thirdly, and possibly most importantly, I wanted to see more of that chick with the asymmetrical haircut, because, well, DAMN. With friends there to back me up, I ventured into TRON: Legacy, and this is what happened.

The movie had a disclaimer saying some scenes were in 2D. This was one of them. Which is bullshit, because if there is one thing I want to see in 3D, it’s a guy sitting on a couch.

After the events of the first film, it appears that Kevin Flynn, who was/is played by Jeff Bridges, made a miraculous discovery inside his computer generated universe, referred to as “The Grid”. Shortly after this discovery, he goes missing, leaving his successful company Encom to fend for itself, and his now orphaned son Sam left with the profits. As Sam, played by Garrett Hedlund, gets older, he disassociates himself from the entire company, until one day he is informed of a mysterious transmission from his father’s office, which has been abandoned for 20 years. While investigating the office, Sam is transported into the grid. While Kevin was first designing the Grid, he needed help, so he created a program called Clu that was modeled after his likeness with the simple command of building a perfect universe. Through this command, Clu conspired against Flynn to take power of the Grid, which he did, and has been looking for a way out ever since. Inside the Grid, the real Flynn’s only allies are a babe named Quorra with an asymmetrical haircut, played by Olivia Wilde, and now his son, Sam. Since Sam opened up the portal that allowed him to travel into the Grid, it is now also open for Flynn, Quorra, or possibly even Clu to escape from the Grid. What follows is a laser-blasted and cum-soaked orgy of visceral effects that blows everyone’s dicks out of their asses and eyeballs bleed out of your ears. Yeah, it’s intense. 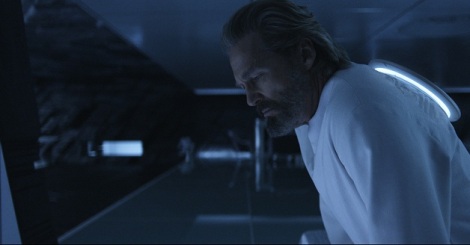 Old Jeff Bridges played a non-confrontational zen hippy. Which is far different from his role in K-PAX” and Stick It.

Where the hell to begin…let’s start with the plot. On my way to this movie with my buddy Wolf Arms, he was commenting on how he had never seen the original and asked if it has a cult following because of the ideas it came up with back in the early 80’s that mirrored concepts that The Matrix capitalized on. I told him no, because that’s not what the first movie was about. This film, however, did have far more philosophical and religious undertones, that weren’t really “under” at all, but this is still a Disney film. The idea was that Flynn discovered intelligent beings within the Grid, one of which was Quorra, and through these beings, humans could unravel the mysteries of life. Uhhh….okay? There is also a standoff between Flynn and Clu in which Flynn admits that although Clu was programmed to build a perfect world, the imperfections of the real world is what makes them perfect. I kind of expected Christina Aguilera’s “Beautiful” to start playing because of how cheesy it was, but like I said, it was Disney, so they were trying to make a point without being controversial or forward thinking. The plot in this film was better than in the original, but mostly it just served as a way to move the story forward while having some interesting allegories about our current society.

I’d like to get ahold of her identity disk, if you know what I’m saying…which you might not, unless you saw the movie.

The reason everyone came to this film was for the visuals, which, to put it bluntly, grabbed your dick right off of you, slapped you around with it, kicked you in the wound that now exists in place of your dick, and then chopped your head off with a lightsaber, that has finally been invented for the sole purpose of chopping your head off. In other words, pretty awesome. The special effects in this film not only set the bar for its current time, but set the standard of things that could be done with visual effects, especially 3D films. It remained true to the themes and aesthetics of the first film, but cranked that shit up to the point of no return. From the design of the Grid, to the outfits the characters wore, to the action sequences, everything was exponentially increased to the highest degree and in an extremely engaging way. I can’t really think of the last movie that I saw that after an action sequence I just kind of thought “Wow”. Good job on that one, guys.

This doesn’t quite capture the spirit or intensity of the action sequences, but I’d need like, and animated GIF for that!

Jeff Bridges was awesome, as always. I feel as though some people might go see this movie and every time he says “dude” or “man”, think it’s some sort of Big Lebowski reference, but that’s how he talked in the first film, and he’s been trapped inside a goddamned computer for 20 years, so of course he still says shit like that. I understand why Clu was a digitized version of Jeff Bridges from the 80’s, but there were times it took me out of the movie. Maybe because I knew his face was fake I couldn’t help but think of how fake it was, but like I said, I understand why it was a fake Jeff bridges rather than another actor completely. Garrett Hedlund was fine, as his purpose was mostly to move the story forward, which he did. Olivia Wilde was, well, fun to look at? Surprised that she is only 26, since she has accomplished way more with her life at her age than I have.

Daft Punk filming their scene in TRON, or just hanging out around the house? Maybe we’ll never know…

Something that really deserves more credit than it might end up receiving is the soundtrack to this movie. Hooollyyyy shiiiiit it was awesome. The score was the first score that Daft Punk were responsible for, despite having produced the soundtracks for other films. Although it wasn’t as much of a dance album as most of their other work, for a giant film that needed to encompass things other than dance numbers or action sequences, it did a great job. Any time you listen to Daft Punk or see one of their videos, it’s hard not to picture them existing in a world like the Grid, so it comes as no surprise that they were approached for this film. Their sound and aesthetics lend themselves to the antiquated future science fiction without directly referencing any one thing in particular. There’s also a scene that takes place at a club and Daft Punk are there in their Daft Punk robot helmets playing the music, and it was pretty funny.

You knew that Clu was a cocksucker right away from that slightly different shade of orange he’s always wearing.

Clearly this is a much longer review than most of the films I talk about on here, but this film provided itself with lots of things to talk about. This was one of the most anticipated films in nerdy social circles, so I figured I kind of owed it to the movie to review it at length. So what’s the final verdict? Everything seems generally positive, right? Yeah, I guess it is. The reason I won’t be giving this movie the best rating available is because I’m not sure that the experience can translate well to the home theater experience. Was it a mind-blowing theatrical experience? Of course. It was more like a ride that you signed up for so you could have all of your senses obliterated just for the sake of fun, and when the credits roll you wipe the blood from your ears and pick your eyeballs up off of the floor, cram them back in your head, and go on your merry way. This film didn’t have a message that we haven’t seen before, but it was still fun to look at Olivia Wilde up on-screen in some weird spandex-y light up outfit. But who knows, maybe I’ll see this shit on Blu-ray and then it rules, I am going to come back and delete this post.