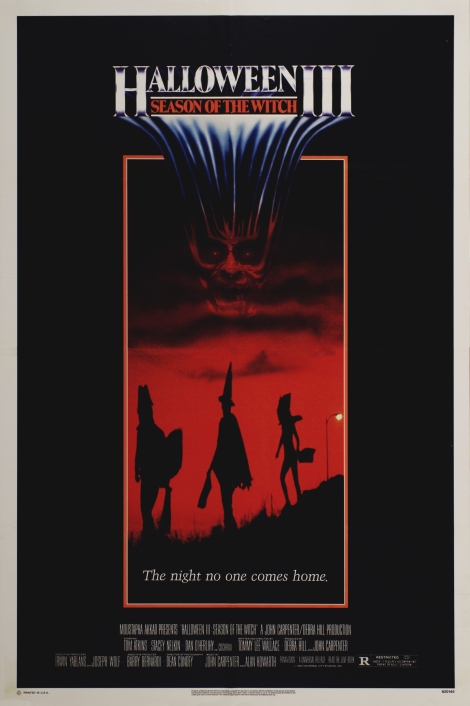 Nope, certainly no Michael Myers to be found in this one! Instead, we get a different kind of terrifying tale. Some dude gets attacked by some other dude in a suit, but he survives long enough to get to the hospital. At the hospital, he keeps saying, “they’re gonna kill us all”, and eventually, he is killed in the hospital by a dude in a suit. One of the doctors investigates the man’s arrival, along with the man’s daughter, only to end up in the small town of Santa Mira, California, home of the Silver Shamrock Novelties factory. They make masks, and with Halloween approaching, are clearly very busy sending masks all across the country, each one with their emblem embedded into the back of it. After further investigating, the doctor, played by Tom Atkins, discovers that the men in suits are actually androids. The owner of Silver Shamrock Novelties is trying to make Halloween return to the original Gaelic festival of Samhain, and claims that every one of the masks has a piece of Stonehenge embedded in it. A commercial that has been repeatedly airing on TV and radio is the key, and on Halloween night, a special broadcast is sent across the country that activities the powers in the masks, causing the wearer to die a gruesome death. Tom Atkins is able to get some of the stations to shut off the broadcast, but the film ends as he is screaming into the phone for the final broadcasting company to turn off the commercial.

Careful, kids! Those things might eat your damn heads off!

HOLY SHIT, WHY DON’T MORE PEOPLE TALK ABOUT THIS MOVIE? I get it, Michael Myers isn’t involved at all, and every other film in the franchise features him extensively. Not having been alive in 1982, I can really only look back on the franchise, and see how this movie could be considered weird. From what I heard, John Carpenter was hoping this could be the future of the Halloween franchise, with every subsequent film having been a different macabre tale centered around Halloween. That makes so much more fucking sense! I mean, Michael only attacks on Halloween? What the fuck is Dr. Loomis doing the other 364 days of the year? Maybe this movie isn’t for everybody, but it’s really creepy and more of just an unsettling feeling, rather than being downright scary. John Carpenter was involved in creating the soundtrack, and one of the best moments is when the owner of the novelty company explains what he’s doing to the doctor, who is restrained, looks him in the eyes, says “Happy Halloween”, and then the iconic theme starts playing. FUCK YES! This movie definitely has more of the Creepshow/Children of the Corn kind of vibe, which I really liked. I also thought it was really cool the way they tied it into the origins of Halloween in a relatively subtle way, by having the emblem of the company be the shamrock. I wish the series could have continued down this path, but I guess I’ll just watch Trick ‘r Treat a few more times, since that’s more along the lines of Season of the Witch than anything else in the Halloween franchise.